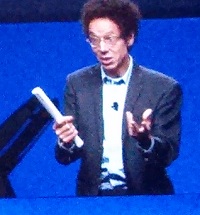 While many know Malcolm Gladwell from his groundbreaking New York Times bestsellers, attendees at the HubSpot INBOUND conference got to see Gladwell live and up close during its day two morning keynote.

Gladwell’s presentation on “David & Goliath: The Power Of The Underdog” is on the same general theme as his recent book David and Goliath: Underdogs, Misfits, and the Art of Battling Giants.

While many fans of Gladwell’s five books wouldn’t expect him to open with self-deprecating humor, within moments of coming on stage at the Boston Conference and Exhibition Center, he took out his smartphone – a BlackBerry device – to prove that he’s Canadian.

(A quick Google search of “BlackBerry market share” shows that Gladwell is right. Most industry analysts now estimate BlackBerry smartphone market share at less than 1% -- not exactly the tipping point anyone at Research in Motion would’ve hoped for a decade ago.)

So what did Malcolm Gladwell share that you can apply to your business challenges?

Businesses and people need to do a better job of transforming and coping with changes from technology.

This was interesting irony given Gladwell’s comments a few moments earlier about his loyalty to BlackBerry.

Gladwell spent several minutes talking about how April 26, 1956 was a huge day of change for the birth of the global economy. On that date, the cost of shipping cargo plummeted with the birth of containerized shipping. In order to create this change, Malcom McLean had to bust up organized labor unions built around loading and unloading massive tractor trailers from ships.

Did you know that global furniture retailer IKEA was almost blackballed out of existence in its early days in the 1940s and 1950s in Sweden?

Why? Because its founder Ingvar Kamprad and the idea of shipping furniture flat threatened to disrupt the status quo with the existing furniture industry. So what did Kamprad do as the underdog?

He looked outside of Sweden for both manufacturing and expansion.

HubSpot was the underdog (and perhaps still is, depending on context)

Given that HubSpot was founded out of MIT on the basic principal that interruption marketing was no longer effective given how modern humans research, shop, and share, there are many parallels that can be drawn between the struggles that Malcom McLean faced and the Inbound movement sparked by HubSpot co-founders Brian Halligan and Dharmesh Shah.

Sports was not always on the radio

Although Millennials are growing up in a world where most keep tabs on their favorite sports teams on their mobile devices, Baby Boomers and Generation X were used to tuning into radio stations to hear play by play announcements and color commentary of their favorite baseball, football, basketball, and hockey match ups.

However Gladwell spoke of a time in the early 20th century when there was simply no sports broadcasting on the radio. And it wasn’t until an extremely widely followed boxing match in 1921 that this all changed.

Revolutionaries are disagreeable and don’t care what others think

If the world happens to think you’re a weirdo (think Doc Brown in the Back to the Future movies), you may be onto something.

A revolutionary says, “I have a new way of doing things. And I don’t care if you think It’s crazy.”

A revolutionary is the kind of person who excels at tuning out the naysayers.

Transforming isn’t about iterating or improving

But transformation isn’t just about improving the status quo.

Transformation is about completely rethinking the status quo and having the courage to rethink existing boundaries.

HubSpot partners are trained to sniff and understand urgency and timelines when exploring whether a particular prospect is a good fit for Inbound marketing.

The underdog, or revolutionary if you will, doesn’t need this training because the underdog has an intrinsic sense of urgency.

What did you find most impactful from Malcolm Gladwell’s keynote at the HubSpot INBOUND conference? Let us know your take in the Comments section below.

And if you’re struggling to transform your B2B technology company with Inbound marketing and Inbound selling, take the first step and download your complimentary copy of the IT Channel Inbound Marketing Planning Guide.