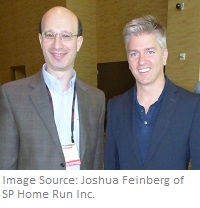 Ever wonder how Geek Squad got its start? Attendees at ChannelCon this year got to hear the definitive Geek Squad story firsthand from the one person on the planet that knows it best: its founder Robert Stephens…or as he now affectionately refers to himself: @rstephens

I was fortunate enough not only to be in the audience, but to be in the right place at the right time to briefly chat with Stephens following the keynote. In this post, you’ll learn 10 key takeaways:

(This is an especially important read for independently owned computer repair businesses that feel that they indirectly compete with Geek Squad. Personally, I think these entrepreneurs would be better off pursuing smaller niches, where they can be big fish in smaller ponds, rather than trying to compete head-to-head with Geek Squad’s roughly 24,000 agents.)

At ChannelCon, I did listen to some “Debbie Downer” attendees complaining about the messes they clean up from Geek Squad and how Geek Squad upsells various services. And sure, it’s always possible to find fault with competitors and nitpick various issues out of context.

But big picture though: Owners of computer repair businesses should be studying examples of success, like Robert Stephens, rather than searching out reasons to belittle.

(You’d have to search fairly far and wide to find examples of IT channel success even in the same ballpark as Stephens. The only even bigger one that comes to mind is Mark Cuban.)

And whenever I’ve blogged about independent computer repair shops competing with national competitors, my general advice: go for a niche or go broke trying to be all things to all people.