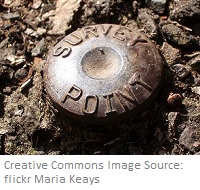 A lot of computer consulting businesses, especially solo proprietors and even moonlighting consultants, try to pretend like their companies are a lot bigger than they really are.

Is this a good idea? (the ole “fake it til you make it)

Generally no! But that’s beyond the scope of today’s post and would involve several rants about ethics and managing expectations.

Today, I want to share some data we recently collected in a survey of 312 SMB technology providers – mostly computer consulting businesses – primarily in the USA, the UK, Canada, and Australia.

In the survey, we asked, “How much of an ownership stake do you have in your company?” 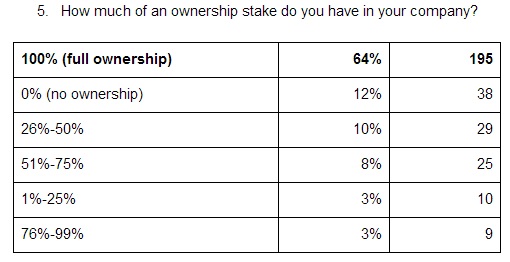 The most popular response was 100% (full ownership) with 64% of respondents or 195 people selecting that answer.

This wasn’t particularly surprising as the IT services industry, at least in the SMB segment, is extremely fragmented with a large number of tiny, closely-held firms.

So with roughly 2 out of 3 of computer consultancies solely owned by one person, what else did the survey reveal?

Not Much Consensus Elsewhere

The second most popular response was 0% (no ownership) with 12% of survey respondents, or 38 people, selecting that answer. What that means simply is about 1 out of 10 surveys was completed by an employee with no equity stake in the business.

With that in mind, the true second most popular response would be found by grouping together the 26% to 75% ownership category, where you’d find 54 survey respondents or roughly 18%.

So approximately 1 out of 5 survey respondents own a significant stake in the consulting business, but not all of it.

Oh and also worth pointing out: 6 of the 312 survey respondents skipped the question.

How much of an ownership stake do you have in your computer consulting business? And how did you arrive at that figure? Let us know your thoughts in the Comments box below.

And if you’re looking to start or grow a consultancy, be sure to download our free white paper on How to Start a Computer Consulting Business: 6 Proven Ways to Build Your Initial Client Base.