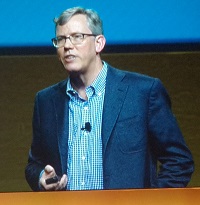 The first time I heard HubSpot co-founder and CEO Brian Halligan present a webinar was on June 8, 2010. It was his Summer 2010 Show and Tell moderated by former HubSpot evangelist Kirsten Knipp.

But there were two things about that webinar, on that day that stood out for me – at least on reviewing the notes four years later:

Fast forward a year later (June 23, 2011), yes it’s bizarre that I have such detailed notes from some HubSpot webinars: Brian Halligan presents a webinar that mentions remarkable four times.

Jump ahead three years to Brian Halligan’s INBOUND 2014 keynote – September 16, 2014 -- and what remarkable nuggets did HubSpot’s co-founder and CEO have to share?

A decade ago, HubSpot didn’t exist. If you needed to do “Inbound” marketing, you needed to buy 10 separate tools, wire them all together, and pray that it actually worked together on an ongoing basis.

Digital marketing pre-HubSpot also depended on a lot of interruption: spamming people in their email Inboxes, throwing up annoying pop-up ads on websites, buying banners ads that nobody wanted to click on, and using cold calls to harass prospects until a very small percentage actually stayed on the phone long enough to tell you to get lost.

As further evidence, Halligan likes to point out how many companies that were on the Fortune 1000 a generation ago are not even in business today.

To perfect these techniques, Halligan recommends that you study the art of Sumo – something Halligan grew quite fond of while living in Japan.

(2) Accept that Prospects Today Have All the Power (“The buying process is getting Yelpified.”)

A generation ago, sales reps had all the power over prospects, because sales reps controlled scarce information.

The internet changes all of that in a profound way: Todays prospects have all the power and arrive much later on in the sales cycle, a lot more prepared and well-researched than ever before.

If you’re in denial over this fact, and if you believe that the Yelp-ification of the world is just a fad, or that it perhaps doesn’t apply to your business, Halligan showed how even prisons are reviewed on Yelp.

And Halligan then went on to share a real 4 star review of a well-known prison where the inmate remarked that she was happy because the officer gave her a juice box.

In the past, when a prospect didn’t know about a particular business, the general sentiment was buyer beware.

Today, where one disgruntled customer can spread their message to millions through search engines and social media, it’s truly a seller beware market.

While many have been speculating for a while that HubSpot would eventually get into the CRM space, Halligan announced in his INBOUND 2014 keynote that HubSpot CRM would be available for partners and customers later this year – with general availability in 2015.

First off, HubSpot CRM – just like HubSpot Signals that was announced last year at INBOUND 2013 (and now rebranded HubSpot Sidekick) – will have a freemium model so that all small businesses can have basic HubSpot CRM functionality.

The more complete toolset should end up being sold at price points similar to Salesforce Professional.

However the remarkable feature set for HubSpot CRM is in its time-savings – where many routine form fills are completely eliminated by virtue of integration with the core Inbound marketing software.

Halligan explained how this time-savings is definitely not trivial and typically equates to about an hour and a half a day per sales rep – or 30 hours a month.

(4) Change Sales by Addressing the Sales Perspective, Sales People, and the Sales Platform

Unlike HubSpot, many software companies would develop a CRM platform in a way that focuses primarily on the software itself.

Halligan understands however that CRM software is a very crowded, highly-commoditized space.

So in order to address these challenges, it’s critical to understand the perspective of the sales rep – not just the sales director – and make the sales platform focused on the needs of sales people.

A generation ago, sales people rallied around the notion of “always be closing” (ABC) - -popularized by the blockbuster movie Glengarry Glen Ross. 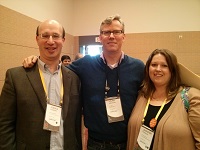 Now in a world where 57% of the typical B2B sales cycle is over before prospects contact any vendor, sales reps need to change their mindset to be much more consultative, from ABC to ABH: always be helping.

Most CRM systems are built to satisfy the needs of sales directors.

So it should come as no surprise that needs and problems of typical sales reps have been placed on the back burner for quite some time.

And while the Inbound methodology is ideally suited for developing systems that attract website visitors, convert website visitors into qualified leads, and accelerate leads so that they become sales-ready opportunities, without these elements sales reps face a tough road ahead with manually prospecting for leads.

The new HubSpot CRM on the other hand helps create context for the sales readiness of leads and even finds prospects for you.

What did you find most remarkable about Brian Halligan’s INBOUND 2014 keynote? Was it one of the nuggets above? Or perhaps it was his dramatic entry onto the stage with HubSpot co-founder and CTO Dharmesh Shah -- rising up onto the stage in HubSpot orange-colored British-style payphone booths? Let us know your thoughts in the Comments section below.

And if you’re part of a B2B technology company that’s struggling to generate more leads, opportunities, clients, revenue, and ROI from your website, definitely download your complimentary copy of the IT Channel Inbound Marketing Planning Guide.