What Did Dharmesh Shah Focus On During His INBOUND 2014 Keynote? 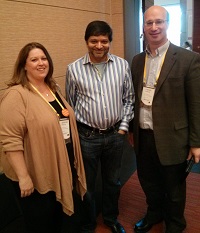 Delivering a keynote speech in front of 10,000 conference attendees is intimidating enough. But what if you knew that this same audience was also hearing from the likes of Martha Stewart, Simon Sinek, Malcolm Gladwell, and Guy Kawasaki?

That’s exactly the challenge faced by HubSpot co-founder and CTO Dharmesh Shah when planning his INBOUND 2014 keynote. How did he do?

In HubSpot’s way of saying it: I’d rate his keynote remarkable – definitely worthy of being remarked about. Here’s why.

On HubSpot as a Company, Exponential Growth, and Building a Remarkable Business

On Needle-Moving New Updates to the HubSpot Software

This was my second time attending the HubSpot INBOUND conference in Boston.

At INBOUND 2013, the big product announcements that I recall centered around the massive overhaul of HubSpot’s CMS, to be re-born as the COS (content optimization system), and Signals (which has been re-branded as Sidekick).

INBOUND 2014 also featured a slew of new product feature and tools announcements for the HubSpot platform that should prove to be a big hit with both HubSpot customers and HubSpot partners alike:

While Dharmesh Shah highlighted a handful or two of the big highlights, he also pointed a whopping 143 of “your ideas” (from ideas.hubspot.com) that have been completed during the past year.

However when Shah turned over the reins for the second half of the INBOUND 2014 keynote to his co-founder Brian Halligan, that’s where even bigger ooh’s and aah’s were heard surrounding product announcements for:

Which parts of Dharmesh Shah’s INBOUND 2014 keynote did you find most impactful? What have you learned from HubSpot’s growth that you have applied to your business? Please share your thoughts in the Comments box below.

And if you’re part of a B2B technology company with plans of its own for HubSpot-style exponential growth, with Inbound marketing and Inbound sales as the foundation, be sure to download your complimentary copy of our IT Channel Inbound Marketing Planning Guide.