Today's episode is a little bit special. Today is our Spring Training episode. We're going to be talking all about inbound marketing, Major League Baseball (MLB), and fielding a complete team.

Way back in June 2014, I gave a talk to a group of local small business owners and marketing managers about using inbound marketing to generate more high-quality leads and close sales faster.

Now, there are a tremendous amount of parallels between building a complete full-funnel inbound marketing strategy and fielding a competitive Major League Baseball team.

I'm not saying that inbound marketers are qualified to become the general manager or president of baseball operations for one of the 30 Major League Baseball teams. But hear me out.

In this talk that you’re about to hear the recording of, because the audience location was in South Florida, there’s an example, some analogies, with the Miami Marlins, who at the time had a tremendously talented right fielder, outfielder, that went on to win the Home Run Derby, was voted an All-Star multiple times, and became the National League MVP before being traded to the New York Yankee when Derek Jeter’s ownership group bought the Miami Marlins, at the end of the 2017 season.

If you're a baseball fan, even a casual fan, you probably know by now that I'm talking about Giancarlo Stanton. That team also included Jarrod Saltalamacchia (“Salty”) who was coming off of a career year with the World Series Champion Boston Red Sox -- and was at the time one of Marlins owner Jeffrey Loria’s prized offseason acquisitions. Within a matter of months, the Marlins and its fans would get frustrated to see Salty underperform so much. So he was eventually cut from the team.

And there's one more baseball player that is actually mentioned in this talk that I gave back in June of 2014. And this one's a little bit more of a sad note. I also referenced another at the time  Marlins Fan favorite: Jose Fernandez -- the phenomenally talented starting pitcher who shattered all kinds of records and literally risked his life multiple times as a teenager, defecting from Cuba to pursue his dream of playing professional baseball.

Tragically, Jose Fernandez was killed in a boating accident in September 2016. And unfortunately for both his legacy and his family, there was some controversy surrounding that accident and the other two passengers on the boat that also lost their lives.

Many inbound marketers in the United States find baseball, America's favorite pastime, very relatable. There are some really solid analogies between building a complete full-funnel inbound marketing strategy and putting together a competitive Major League Baseball team or your fantasy baseball roster.

And if you've ever seen the movie Moneyball, starring Brad Pitt and Jonah Hill, it talks about the story behind sabermetrics and baseball becoming a lot more analytical, based on legendary Oakland A’s general manager Billy Beane. This is very similar to how marketing and sales have becoming increasing data-driven -- a trend expected to accelerate dramatically with more mainstream adoption of artificial intelligence, chatbots, and machine learning.

So as we head into spring training, it seems like a really solid time to revisit the recording from this seminar. And I hope you find a lot of value in this.

You’ll get a quick overview of the inbound marketing methodology and its key phases, steps and tools -- and why this matters so much to anyone that's looking to generate more high-quality leads and accelerate more of those leads into new clients and new revenue.

The Pitcher and the Catcher vs. 25 Players on the Other Team

Are you a baseball fan?

The problem, however, is that when a lot of people that are putting together their marketing and sales team, they’re simply not getting enough players on the team. And it doesn’t matter how exceptionally talented they are.

If for example, you're a Miami Marlins fan, you could bring Giancarlo Stanton who's leading the National League in Runs Batted In (RBIs) and who just got asked to participate in the All-Star Game Home Run Derby.

You could bring along the catcher, “Salty,” who's the World Series hero from the Boston Red Sox, who's now with the Marlins and actually lives here locally, right in the Aero Club in Wellington.

And you could bring Jose Fernandez -- Rookie of the Year last year, who risked his life multiple times defecting from Cuba to make it to the U.S. -- but is now unfortunately out for Tommy John surgery for the rest of the year.

Why SEO, Social Media, and Blogging in Isolation Never Works

And that's a big part of the reason why people face a lot of frustration with their marketing. They're showing up, and they've done a little bit of SEO, social media, or blogging.

But there is no one in the “outfield.” There is no one covering the infield. They're missing the other six players on the team -- not the mention being able to fill out the lineup card with a total of 25 available players.

So what can you do to make sure that you're not just doing a little bit of SEO, social media, or Google AdWords in isolation without taking into account your content and the context?

If you try some of these marketing tactics in isolation, your website ends up being like a ghost town -- like an abandoned village, city, or town that was once viable. There's no economic activity.

Or worse yet, if you're doing some of these activities without content and context, you end up coming across like a selfish spammer.You don't want to be like those guys.

What is Inbound Marketing?

This is the inbound marketing methodology. It goes from

During the Attract phase, where you're looking to get the right strangers and the right eyeballs on your website, blogging is super important. But if you hire someone new and say “go write some blog posts for me because we need some business on our website,” it probably by itself will not work.

Why? It would be like if the Boston Red Sox send Big Papi (David Ortiz) into Yankee Stadium, but there's no one there to pitch, catch or play the rest of the field for the Red Sox versus the Yankees.

Keywords also really important, but if you just pay all of your attention to keyword research and you ignore everything else, the strategy is going to completely fall apart. Social media is another area where too many people try to use social media to improve inbound marketing without thinking through the rest of their inbound strategy.

During the Close phase, as you're looking to move people through the buyer's journey and accelerate the sales cycle, use very targeted, segmented email.

And in the Delight phase, the area of inbound marketing that a lot of companies don't pay much attention to, HubSpot has totally nailed it with building out a whole HubSpot Academy team of full-time trainers and instructors that teach classes -- actually calls it customer marketing.

HubSpot continues to market to customers because it doesn't assume that once you're a customer that you're going to be a customer forever.

HubSpot has made this a priority because of the relatively high average client lifetime value (LTV) of a customer and because it’s an inbound-driven company. When delighting customers, so they turn into promoters, use events, social inbox (basically social media monitoring),  and smart content (personalization for buyer personas and lifecycle stages).

Why the Game Changed So Much in a Few Short Years

My talk today was inspired by a long-time column in Inc. Magazine called “The Way I Work” where it interviews different small business owners and executives about what they do on a daily basis and the tools that they use.

So you’ll get a broad overview of some of the inbound marketing activities that we're engaged with on a monthly, weekly, and daily basis.

We're going to talk about

A lot of software companies look at what their client ultimately worth and consider whether it's worth touching every single lead and whether a certain amount of workflow automation and segmentation can eliminate some of the really expensive touchpoints.

The reason that this is so critical now: at least 57 percent of the sales cycle is now over before somebody contacts a vendor. Regardless of the kind of product or service that you're selling, by the time someone is talking with you, they've done almost 60 percent of their homework already.

This change in behavior started on the B2C (business to consumer) side, going back to the late 1990s with Dell in their PC business. The way we shop for cars, book airline flights, check investment accounts, and keep in touch with social connections is now vastly different.

So by the time someone is talking to you, they're expecting you to have much more advanced answers. The person who is interacting with those customers at that stage needs to be better trained.

But what that also means: if you don't have content that is getting your company or organization found during that first 57 percent of the sales process, you're pretty much invisible and irrelevant.

And here's the worst part: if you only get in there at the end of the sales process, the only thing that matters is being the lowest price, which sucks. Totally. It's a terrible value proposition where you're essentially a commodity broker. You don't want to go there.

It's really important to arrive early enough where you can establish value, frame the discussion, and be seen as a trusted advisor. That's really critical.

And the sooner you can get prospects “off the market” and pay attention to your thought leadership, the better that chance that you’ll have to protect your margins, pricing power, cash flow, and ultimately the survivability of your company.

For example, small managed service providers (MSPs) have this notion that if they could just grow their companies from one employee to 10 employees or 20 employees, everything would be swell.

This slightly larger company now needs $80,000 per year system engineers. So their overhead is going through the roof. At the same time, they're getting squeezed as they grow with health insurance costs. And a lot of their vendors are consolidating, which puts more financial pressure on them.

So it’s really critical to get there early on when they have a chance to get their thought leadership in front of prospects and get trusted business advisor status.

In this special Spring Training edition of the Inbound Sunshine Podcast, we've been looking at inbound marketing, Major League Baseball, and how to field a complete team.

The end-game: attracting more high-quality leads and accelerating those leads into new clients and new sources of revenue.

I'm so glad to have had you with us for this episode of the Inbound Sunshine Podcast. I am Joshua Feinberg, and we look forward to seeing you back again next time.

If you learned something valuable from this episode, please subscribe to the Inbound Sunshine Podcast on iTunes and leave us a review.

To get notified about upcoming episodes, be sure to visit www.sphomerun.com/inbound. 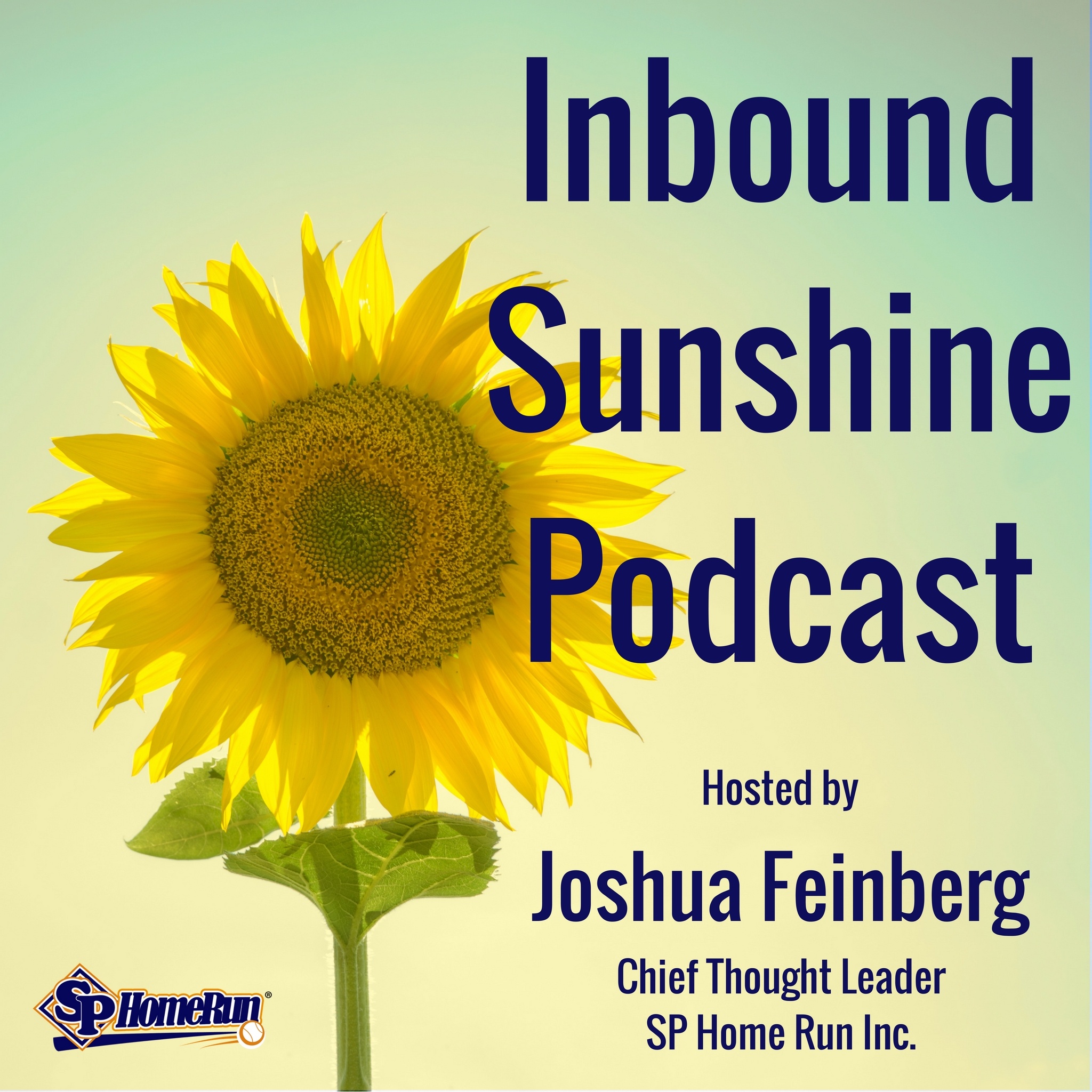 Get Notified About Upcoming Episodes