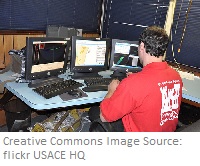 Even though many dominant companies in the IT channel try to get their message out with a one-size-fits-most approach, I reject that notion. Why? Those that provide small business computer services are simply way too diverse in their business models and target markets to try to group everyone into just a few buckets or segments.

We recently ran a survey of about 300 technology providers, primarily small IT providers, around the globe to take a pulse on a number of issues. While data elitists may argue that our simple questioning in Survey Monkey was “unscientific,” the data nevertheless revealed some pretty telling findings.

In this post, we’ll look at those who provide computer services to small businesses and what their business models are primarily focused on. 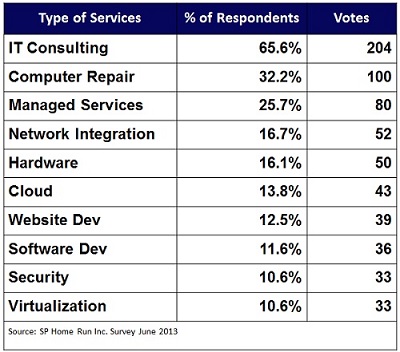 In this survey, we simply asked, “What is your business model **primarily** focused on?” and we allowed multiple responses, or votes if you will.

IT consulting is in first place by a very large margin. In fact, about two-thirds of those surveyed (65.6%) provide some kind of IT consulting.

What’s interesting about these findings?

Despite all of the analyst-proclaimed opportunity and hype surrounding cloud and mobile, very mature small business computer services categories are the overwhelming winners in this survey.

Rounding out third place, we found managed services being offered by 25.7% of survey respondents.

Rounding Our Slots Four Through Ten

After that, for the balance of the “top 10” small business computer services, the votes were a lot more closely clustered together.

Network integration and hardware just about tied for fourth and fifth place – garnering 52 and 53 votes respectively. Given that the survey lacked “scientific” oversight, call this a tie.

The final four services categories, essentially seventh place through tenth place, were only separated by six votes – or less than 2% of the survey responses.

Again, because our Survey Monkey research may raise some eyebrows with professional market researchers and statisticians, we’re going to call this essentially a four way tie between:

Those surveyed for the most part had a previous relationship of some sort with SP Home Run Inc. – generally either clients or leads.

The survey responses were collected via Survey Monkey during the second week of June (2013).

Overall, the survey methodology may not stand up to scientific scrutiny, but that’s not what we were after. (Heck, one former SMB channel manager even e-mailed us to tell us off about this issue. No, I’m not kidding. Really. The ironic part: this was one of the best received surveys that we’ve ever run.)

The survey did successfully answer dozens of questions we had. In the coming weeks, as time permits, I’ll try to share a few of the more interesting nuggets.

But in the meantime, for those that provide computer services to small businesses, now you know what’s on the “top 10 list” among your peers.

Which of these top 10 small business computer services does your company provide? Are any of your top revenue producers not on this list? Please let us know in the Comments box below.

And to follow-through on the tips introduced in this short article, be sure to download your free copy of the special report on How to Start a Computer Consulting Business: 6 Proven Ways to Build Your Initial Client Base.