How IT Marketing Managers Can Avoid Becoming Dinosaurs 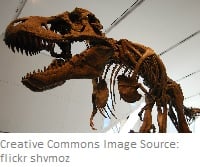 Most good IT marketing managers are intensely focused on delivering great ROI and growth for their companies.

But not all CEOs and clients are prepared to modernize their marketing. Many are still operating like it’s 2005. In this post, we’ll look briefly at how IT marketing managers can avoid becoming dinosaurs – which starts by having a firm grasp on recent advertising and marketing history.

Now I don’t have any Star Wars music cued up, but I will tell you that a long time ago in a galaxy far, far away...

Before Tweetups and Hangouts, way back in the 1950s, everyone sat around a tiny little black-and-white TV to watch the same TV show at the exact same time.

Car buying was simpler because media controlled all of the information. Car shopping was also relatively simple and one-sided. Unless you were an insider, you had no idea if the deal was good, bad, or really bad.

With lots of choices right on Main Street, who needed eBay or Amazon?

“Everything” was in the catalog – with air quotes around everything.

Small business owners didn’t talk about lead generation or sales funnels, but if they did the telephone would have been one of their main high-tech tools.

And a tool for those too lazy to get up from their chairs: the remote control.

By the late 1970s, computing started to get personal – the seeds to high-volume personal computing were planted at both Apple and IBM. And this changed the workplace forever.

But even when talking about technology like personal computers and software, gatekeepers at publishing conglomerates still controlled the information.

If you needed a better rate on your bank CD, mortgage, or car loan, you’d better check the newspaper because print media empires still thrived.

Then along comes portability with the original Compaq luggable.

Then along came the first high-volume commercial on-ramp to the Internet.

And the roots of mobile are planted…although the first few versions kind of sucked by today’s standards. Anyone remember the Apple Newton?

Even our kids though are entranced by mobile devices.

But, then bad guys take things way too far and threaten to ruin e-mail marketing for responsible marketers. And force the CAN-SPAM Act.

And technology, auto dialers, and offshore BPO companies enabled telemarketers to be even more obnoxious than humanly possible, at a fraction of the cost of just a few years earlier.

Again, a few bad apples ruin it for everyone and the National Do Not Call Registry is born.

A few years later, Apple finally gets mobile right with the iPhone and iPad. Make that insanely right!

And TV commercials are history…or at least endangered species with the rise of the DVR.

Humans have changed dramatically. Now humans are informed, in touch, and in charge.

And they are not afraid to scream back at telemarketers: “I hate you! And won’t ever buy anything from you.”

Dharmesh Shah of HubSpot has a theory on all of this: Smart phones will eventually kill stupid phone calls. His HubSpot cofounder Brian Halligan is even well known for the sound bite that his least favorite iPhone app is the little green phone icon.

All of this has radically changed the B2B sales cycle. Now as much as 57% of the sales cycle takes place before the typical B2B decision maker contacts any sales person. In other words, the decision is already more than half-made before most reach out to any vendor.

By the way, that stat comes to us from CEB – formerly known as the Corporate Executive Board.

So with 57% of the typical B2B sales cycle over before decision makers contact anyone, the only question is very simple, but profoundly important to your company’s survival: What’s that question?

Will your company be found? (Or will you become invisible and irrelevant --- basically extinct like a dinosaur?)

If your marketing still looks like it did 5 years ago, your company’s future is in danger. Big time danger!

How IT Marketing Managers Can Stay Relevant and Deliver Results

Since most B2B decision makers now begin to solve problems by searches that originate on their smartphones, tablets, laptops, or desktops, it’s critical that your company have a very strong and authoritative thought leadership presence.

This means, you need a persona-driven inbound marketing strategy for attracting website visitors, converting strangers into leads, and closing leads into customers.

What have you found to be most critical for IT marketing managers to embrace to avoid obsolescence? What’s been your most effective strategy? Please let us know in the Comments box below.

And to get started on the right path with your company’s inbound marketing strategy, be sure to download your free copy of the IT Channel Inbound Marketing Planning Guide.

How to Write Cold Emails for B2B Technology
SEO Tips for Small Businesses in Tech
4 Video Best Practices for IaaS, SaaS, and Fintech