Most C-level executives of data center companies are not new to the industry. And even if they are new to leading a data center provider, they came from a company that was one degree of separation away – during the previous 10 to 15 years of their careers

on in their careers, scaling marketing and sales was pretty straightforward. The plan included things like renting lists, making cold calls, emailing those lists (basically what’s known as spamming), and exhibiting at trade shows. And things were humming along pretty sweetly for a until along came change.

10 years ago, a mobile device was a BlackBerry or Palm Treo – and a tool largely limited to the geekiest of the geeks. Because mobile bandwidth was crazy expensive, and largely sucked at least in the USA, mobile was the exception, not the rule.

Today, that’s all completely changed. Mere mortals, even technophobes, feel very comfortable with their iPhone or Android-powered smartphone. Tablets are so ubiquitous that even many toddlers have their own. Wi-Fi and 4G bandwidth now pervasive. And there are more mobile devices on the planet than toothbrushes. Kind of gross, but game-changing.

10 years ago, when you wanted to look-up something online, you needed to wait until you were back at your desktop or on your notebook, in your office or home office. Today, any question you could possibly want can be, within seconds, no matter where you are: checking into a conference, while on the elliptical at the gym, or while standing in the middle of a data center.

10 years ago, was social media even part of your personal or professional life? Today, a huge percentage of people check their Facebook, Twitter, or LinkedIn stream within minutes of waking up each day – and right before going to sleep each night…and oh yeah, a few dozen times in between.

What about ? 10 years ago, cloud-based apps were really early-adopter-ish. Today, nearly all IT professionals that influence data center purchase decision use cloud-apps and mobile apps.

Why the Traditional Marketing is Broken

So as mobile, search, social, and cloud all hit tipping points, over the past years, the B2B buyer’s journey changed…drastically.

Your buyers are more empowered than ever and doing insane amounts of research on data center companies before they’re even ready to talk to your sales team.

Depending on you ask, anywhere from 57% to 90% of the buyer’s journey – and decision-making process is over – before your decision makers are ready for a conversation with you.

So if you’re still heavily relying on the broken marketing playbook – powered by rented lists, cold calls, spam, and interrupting people at trade shows – you’re simply arriving too late, after most of your buyer’s decision has already been made up.

This is a big challenge for data center companies. But it’s also a huge opportunity if you can get found early enough, in the right places, by the right decision makers, and in the right context to achieve that all-so-coveted trusted advisor status.

How do you do this? By creating remarkable thought leadership content at scale.

Most Data Center Companies Asleep at the Wheel

In a world where decision makers are in control and have all the information that they need, on their terms, when they want it, the sales rep is no longer the gatekeeper -- and many times isn’t even in the loop for most of the sales cycle.

And at the same time this once-in-a-generation change was going on, decision makers got fed up with and really good at blocking out the kind of irritating interruption-based marketing that dominated for decades -- including cold calls, trade show booths, direct mail, and rented email lists (in other words: spam).

How is your data center company adapting to these new realities? Or are you living in the past? Let us know your take in the Comments. 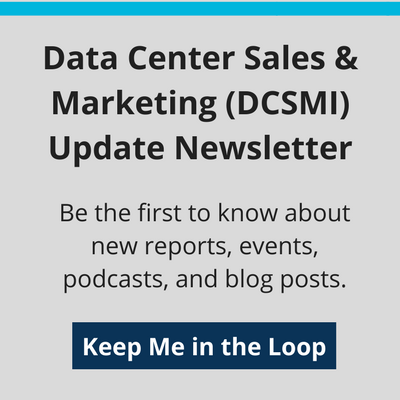